83 replies to this topic

You don't have to join the staff, you can be freelance artist for the mod so if want that, PM me and i'll give you something to try doing

otherwise joining actual staff is more, show work, be evaluated for sometime as staff position, you are expected to do more stuff.

Hmm...nice to see that I wasn't forgotten...and yes...I am still alive.

School + life is challenging, but I hope to be productive again at some point.

Quite, cheers for the background, interesting read 'ollo

will osurises tanks or machines be like the saboth in Doom3?

They're more mech users pretty much the only 3 tanks seen are the flame, toxin and ethier its a railgun or a sonic tank

IMO, the story for Osiris should be made different in some ways from how it is written now.

The background story could perhaps be centered around two points, such as:

*- The allies constant usage of massive Chrono Warping weapons have lead to an unexpected occurrence where a large unknown object was brought through a warp hole. The object was an alien craft that was found crashed on a wall of rock within a canyon range. A salvage operation takes place and strange technologies are found in the interior along with the dead bodies of the alien crew members. The central technology found was integrated with the allies secret program.

*- A secret program was started by the Allied Legion that involved the creation of a machine that relied on human minds for it's consciousness(Yes, much like Cabal, but with some differences). This machine was intended to be used as a counter for Nexus wide intelligence network and hacking attacks. A Yuri loyallist attempts to sabotage the project during it's final stages of completion.


I don't have time to write anything more right now, but please consider the ideas.

you just took the crashed scrin ship story from TS, and you further take from TS by having a cabal thing for allies...

Basically, the Allies (with a small contribution from the Soviets) created NEXUS to fight Yuri. The Soviets suspected that NEXUS would then be turned to fight them so they worked on creating their own AI. The war ended before the AI was created and, as the Soviet Union collapsed, the project was abandoned. NEXUS stumbled upon the facility containing Osiris roughly halfway-through the Robot Wars, and compiled the existing code, hoping to find the resources he needed to deal a final blow to the Allied Legion and the Freedom League who, despite his efforts, had managed to escape their impending doom for this long. What he found was something that scared even him...

Some ideas from this picture(I need Nyerguds to explain a story he told me again, I can't be bothered): 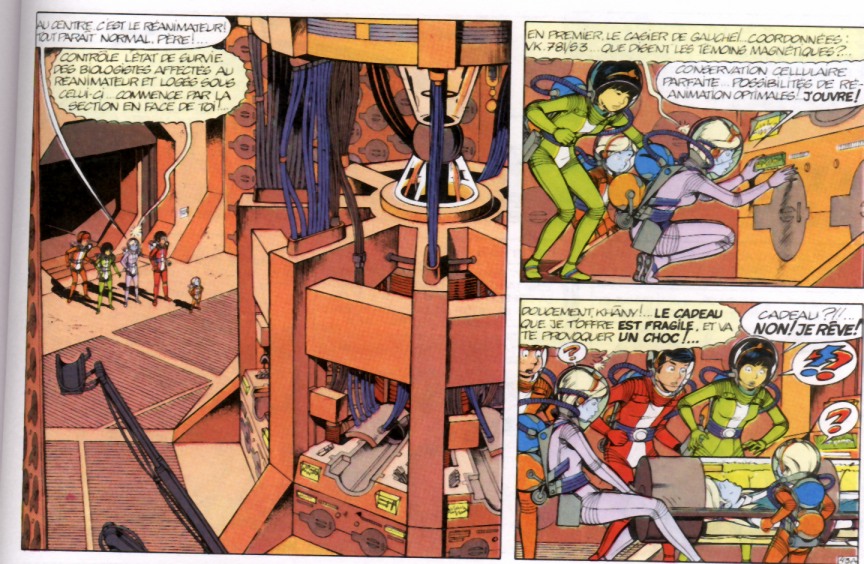 *Puts fingers in ears and sings* "It's the tastiest...crumbliest...flakiest chocolate..."

did'nt think that they sold those bars in UK

anyways I wonder what could scare nexus

cabal wouldn't have been scared

cabal wouldn't have been scared

Of course nexy aint as cool when got another very bad guy on the scene that enjoys harvesting humans and nexus troopers for melding and scared is kinda wrong word to describe... more like nexus' big ego got a dent on it in the 1st encounter leaving Nexus scouting party destroyed utterly.

Some ideas from this picture(I need Nyerguds to explain a story he told me again, I can't be bothered):

Hehe... well basically the story was that a planet was facing destruction from a natural disaster, namely their twin suns were about to crash into eachother. So they evacuated and left those they couldn't evac is suspended animation (mostly underground) in which they could survive indefinitely.

One of these people, in suspended state, was put in a mind-enhancing machine where he was supposed to oversee the status of the planet, and maybe control the reconstruction in the slim chance the disaster wouldn't destroy everything.

After about a 2 million years, the planet was inhabitable again. However, there was a fault in the system... the man was to monitor the planet from suspended animation, but apparently the system woke him up once the planet was deemed inhabitable again. But since the place where he was put was unreachable to any remote controlled or independent robots in the facility, he could not free himself from the machine, and remained trapped inside. The people who returned after half a million years later found the planet terrorized by the technologically enhanced mind of a man who died trapped inside a small capsule, his last agonizing claustrophobic thoughts imortalized in the mind-enhancer...

This is one of the stories in the Yoko Tsuno comic book series, btw.

That story is a great idea for explaining Osiris, some similarities with your original story there Apollo?

Yes, some but the RS plot has it very indepth explaining it all why the side does what it does or believes in what it believes in or how it came to be.

I was playing warzone 2100 a few days ago, and while i was trying to plow through the game's 200 or something technologies, I came across "NEXUS link turret resistor circuits" Which basicly gave you increased resistance to NEXUS's Hacking powers.

I know doing something like that in the Red Alert 2 engine would be near impossible/impossible, But it still would be kinda neat.

units which are invunerable to hack to could be implemented but would kinda be op/abused.

I want a trailer of sw .. incoming laser satellite strike

If you mean 2.0 laser strike there is already bout 2 or 3 youtube vids with that demonstration of pwnage

Back to Robot Storm