77 replies to this topic

Perhaps at level 3 Iron Hills Dwarves could get the ability to switch to war mattocks, increasing their damage against units with heavy armor, but lowering their defense and preventing them to enter shield wall formation.
But then again, the faction is already very rich and diverse as it is

For his lvl 1 power i also added resistance to knock back for him! as a prince who has a "stonehelm" nickname and hold erebor during war of the ring he deserves that imo.
Rank 1: Prince of Erebor
Whenever Thorin attacks, nearby troops gain a small attack boost(15%). Stonehelm is resistance to knock back!
Rank 3 : "Stand Strong"
Stonehelm gets 200% armor for 30 seconds.
Rank 5 : "Warrior Prince"
Permanently(passive) gets and area of effect for his attack.
Rank 7 : "Iron breaker"
[Creates something similar to a golden buff around him, gets damage bonus and nerf enemies around him]
Stonehelm causes fear in the hearts of his enemies for 30 seconds he gets 100% damage, reduce 25% of enemy armors and cover them with fear)
Rank 10 : "Stonehelm"
[A short radius area of effect which deals a great damage to enemies in his front vision like the vanilla Gloin's lvl 1 ability but much stronger]
Stonehelm use anything to save his people, even use his helmet to smash his enemies! dealing a superior damage to the enemy.

For Stonehelm's Rank 3 why not use the old TDH Tier 1 spell for inspiration? i.e

Why don't you name Balin "Balin, son of Fundin"? It has a nice ring to it. (You might as well call Dwalin the same.) By the same token, I think it's better to call Gloin "Gloin, son of Groin". If these patronyms are too repetitive, you can use the Dwarvish suffix -ul, as seen on Balin's tomb, where he's called "Balin Fundinul".

Speaking of Balin, surely his ultimate power should be "Lord of Moria", given that the retaking of Moria was his ultimate solo achievement. Maybe it could summon his Moria company (some dwarves including Ori and Oin) and equip him with Durin's axe (which he found in Moria) or something like that.

The rings around the fortress (Where you build the extension) on some maps are kinda hard to see, I know that most people know where they are just by playing the game, but it would be nice to be able to see them a bit better.

Erebors close ranged units attacks seem a little sparatic, Ive seen the units in the back of a squad just walk back and forth until half the squad is wiped out, Then they decide to do something.

I feel like the Erebors melee units attack WAY to slow. It feels like enemy units get like 2 or 3 hits in before they can even get one. I don't know if thats the way its just supposed to be or not.

I remember that in BFME 2, Erebors fortress Hall Expansion used to be able to hold units, That way you could be able to move them faster through the mines and other fortresses Hall Expansion's. But why doesn't this mod include that?

Some of the selector buttons (in game) don't really have any "brightness" to them. So for example I upgraded my Hall of Warriors all the way, but some of the unit selectors still look like they are "not enabled". I can still select them and everything but it throws me off every once and a while.

Thats just what ive found. Thanks a ton for making this mod!!

LORD OF THE RINGS ERA HEROES

Bard II strikes the enemy with his sword and temporarily gains +50% armor with his shield.

If Brand dies while Bard II is on the field, Bard II gains a temporary +300% damage increase and loses 33% speed.

Whenever Thorin attacks, nearby troops gain a small attack boost.

Thorin Stonehelm regains a portion of his health back and gains 50% damage but loses 50% armor for the duration and loses 33% speed.

I have an idea for the Masters rank 5 power.

Dragon-Sickness:
the master gains resources per kill passively or temporarily. However this is not a creative idea, its a reference to his end in the book, where he fled with his gold into the Waste.

Another proposal is to call this ability "moneybags" as a reference to his greed for gold.

Summon a treasure. The treasure is surrounded by guards (and Alfrid) and the guards are attacking(everyone) those who go near the treasure.

Hadhod dumps a hidden trap. If the enemy is nearby the trap explodes.

Gimli and Legolas gains +50% armor when they are close to each other.

Rank 1. Die before your stroke fell!

Legolas launches a continuous volley of arrows upon a small selected area, echoing his characteristic from the movies of never running out of arrows.

For King Brand have you guys considered for his level 8 power barding kings guard some of the styles from Rise of of Mordor mod like these: 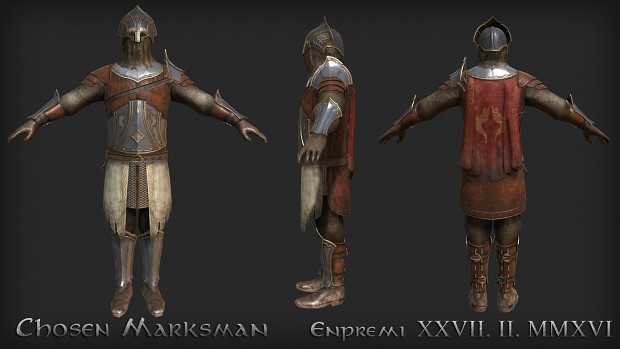 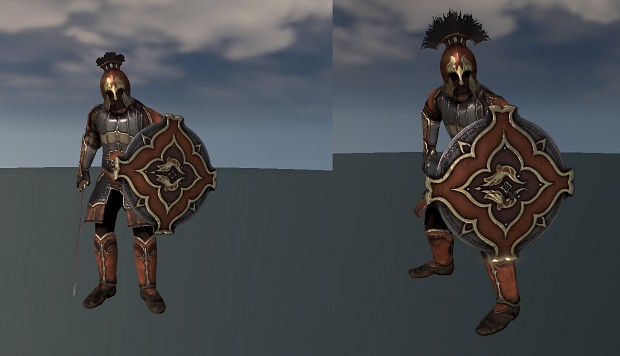 I think we could have the spell to Summon Beorn in Erebor, maybe replacing Fully Armed and Filthy.

Have you ever thought of giving the Dorwinion Legionnaires a more prominent role?

Perhaps as a fortress unit a final update for the Dale barracks? They are so unique in their design I feel they do deserve a more permanent place in the faction rather than solely being Inn units.

I would also recommend of maybe giving them a shield-wall ability? They are designed like elite unites, I feel like they deserve to be given the role and abilities of elite units. I would put the Blue Mountain Dwarves in the Inn tbh. They are also well-designed, but  given far off origin it makes more sense to put them in the inn take full advantage of the Dorwinions' uniqueness and classy esthetics and make them a fortress unit or a elite unit for the Dale barracks.

They will be there in the future.