I used the Brightness/Contrast tool on Photoshop

and just in case you were wondering, I'm not allowed to use any BoG stuff, just zimoo's models.

Today I have another Evil Men update.

First, Fuinur (the Black Numenorian/Corsair hero) has a new skin. Nothing really special, but now he looks a bit different from the other corsairs: 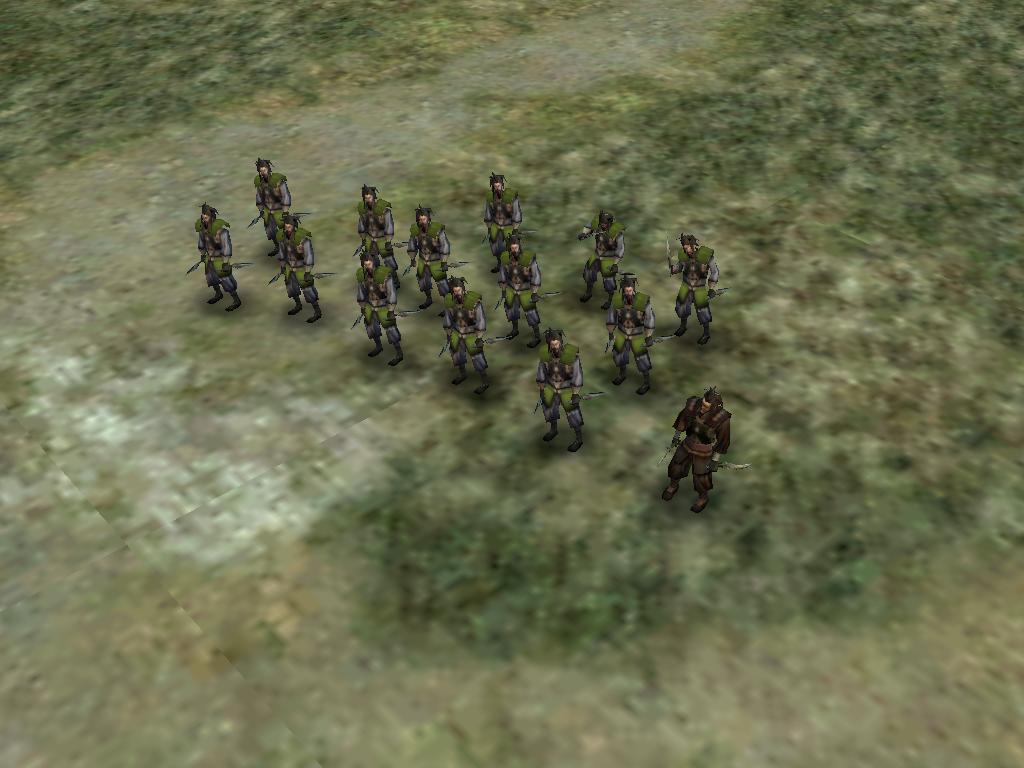 Here's a render of Fuinur: 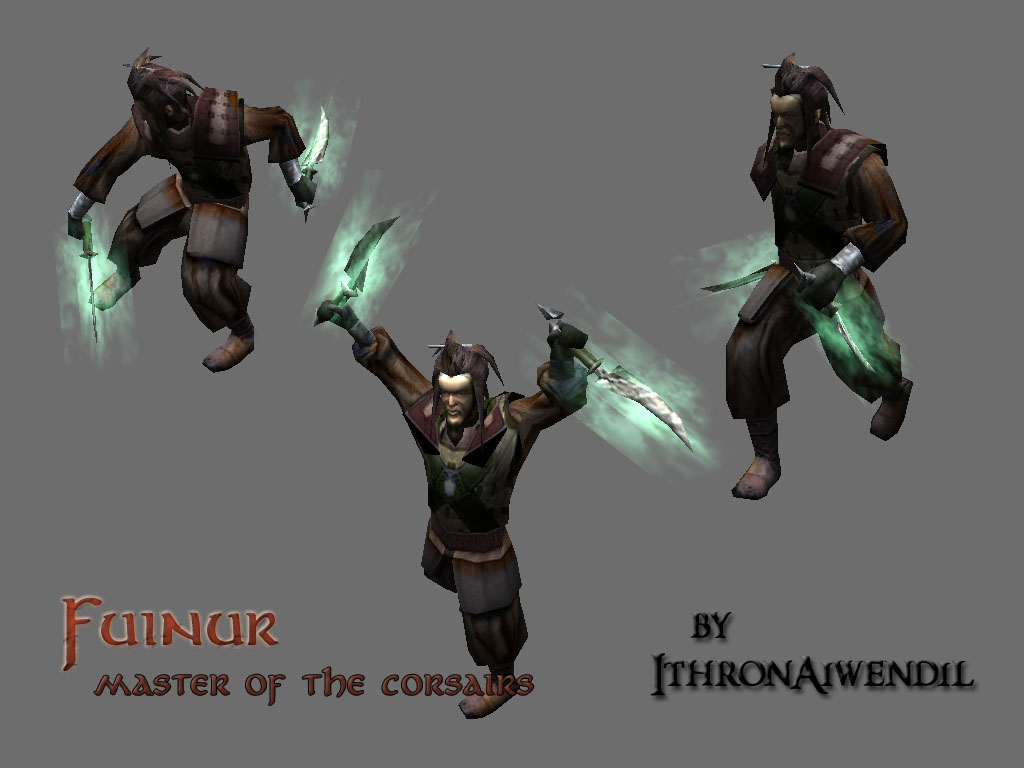 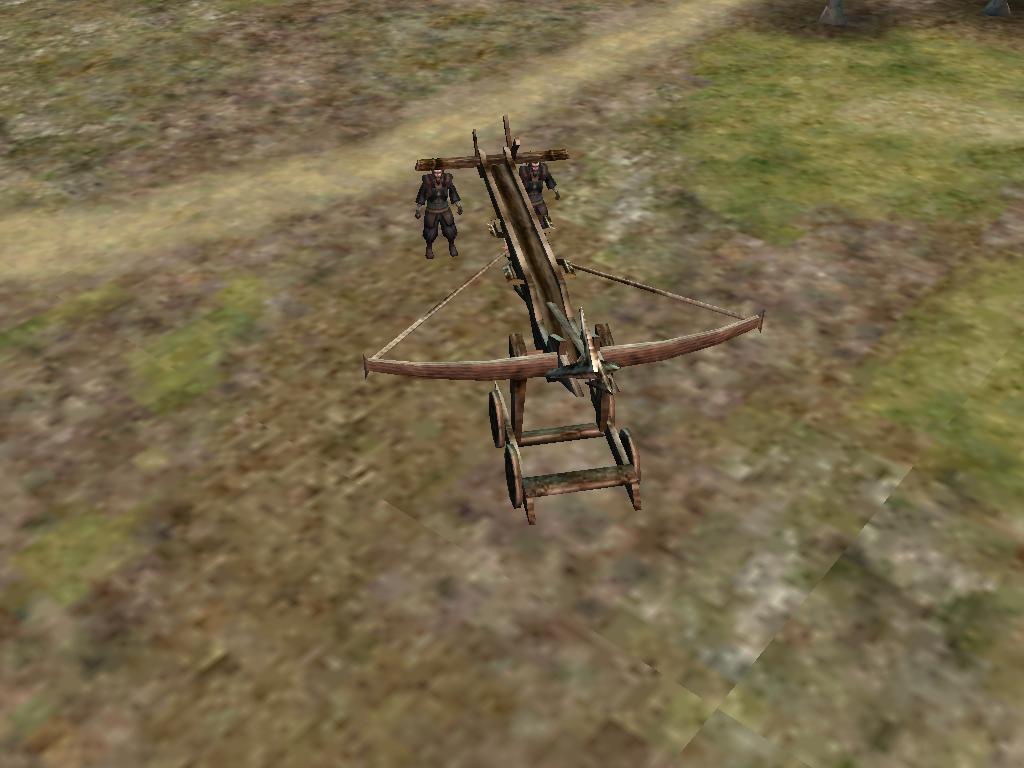 And finally, Rhun Royal Guard, the new hero horde of Evil Men (at the front of the pic). You can compare them with some other Easterlings in the pic: 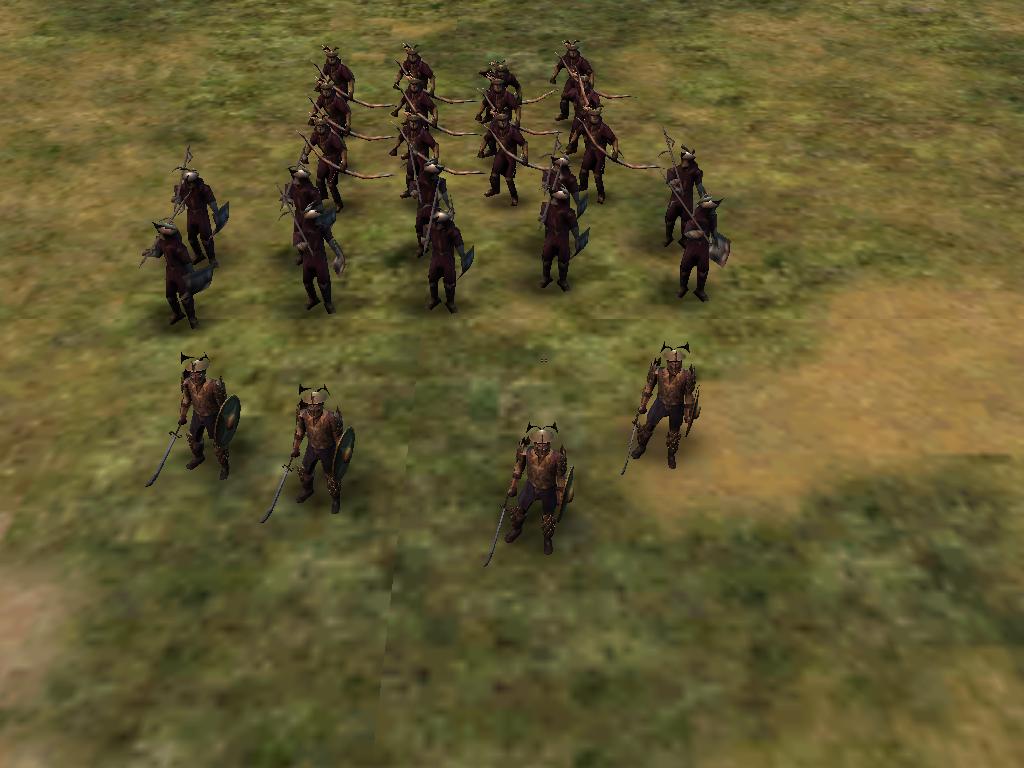 except the ballista... looks way off in the binding

or, just the ballista, not the people... or in fact, they do too

a tiny bit...
I already have a binded ballista, ready for new units and skin, if you'd like me to bind one better than zimoo

Sure, you can help me with the ballista if you want. Should I send the model to you or something?

Great stuff, I like the glow around the dagger kinda things of Fuinur

sure, send me the model, skin, everything

Or basically, just the skin and model

zimoo, I think there's no big problems with the binding, only the wheels don't move. It think the model itself is great anyway

I have another Evil Men update, this time it's only about the Black Numenorian Marauders. They are possibly one of the coolest units of Evil Men.

Here's a render of them: 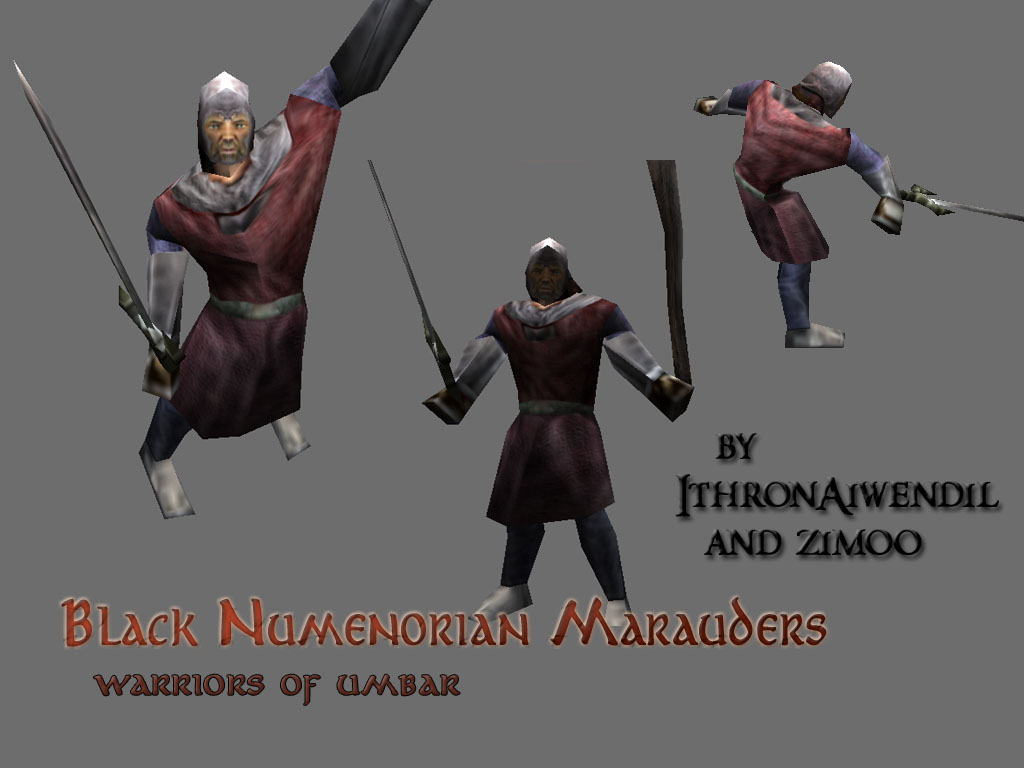 The skin is made from scratch, except the face and the wooden club thing. 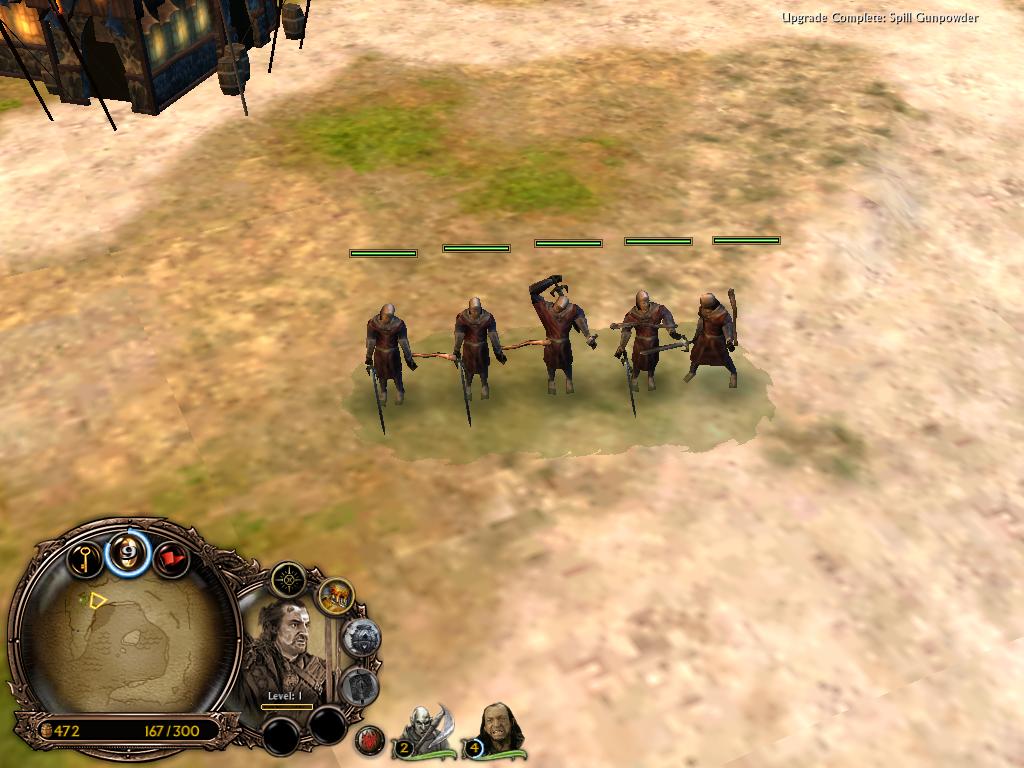 Black Numenorian Marauders using their Spill Oil power (some other Marauders have already lit their oil): 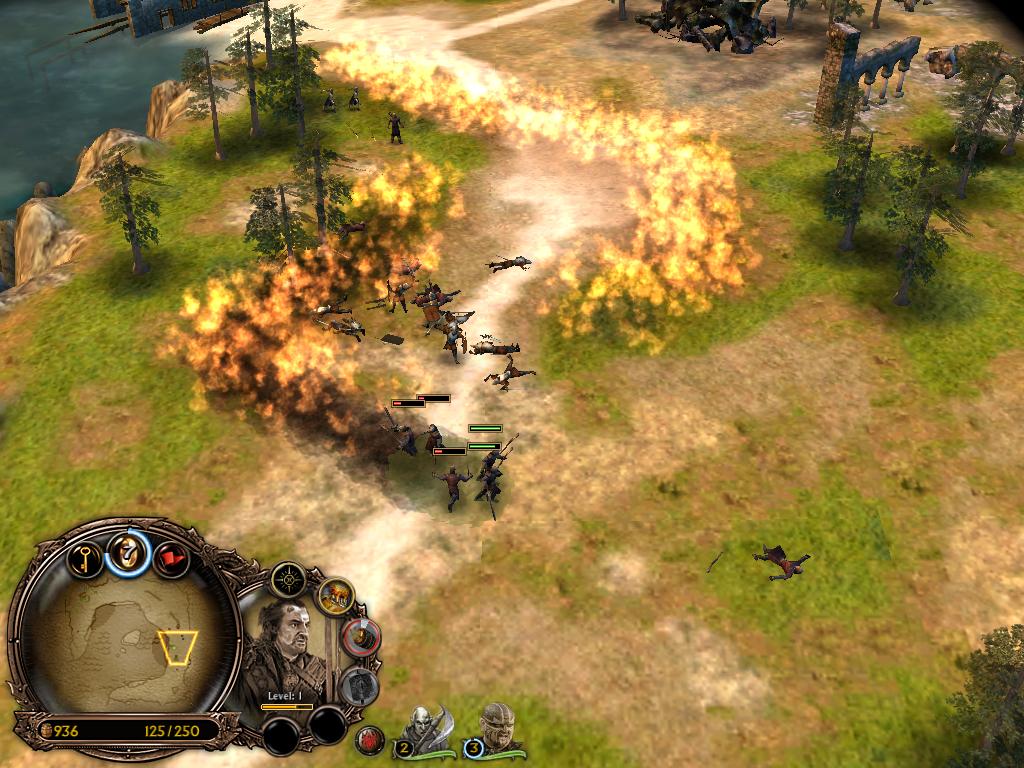 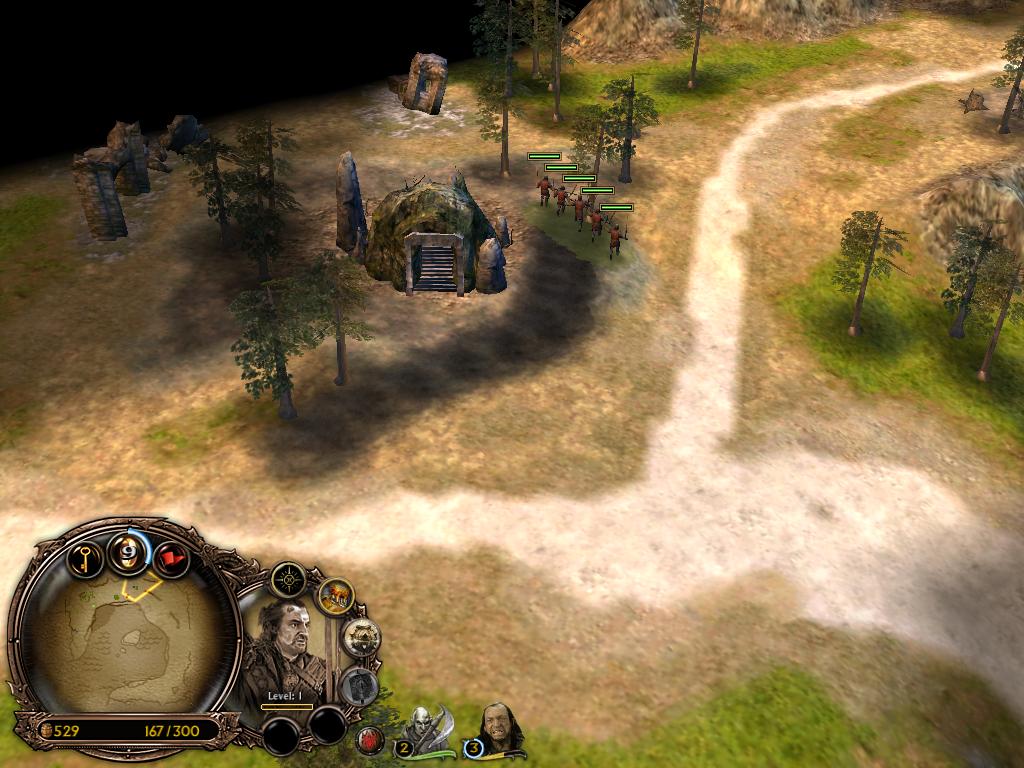 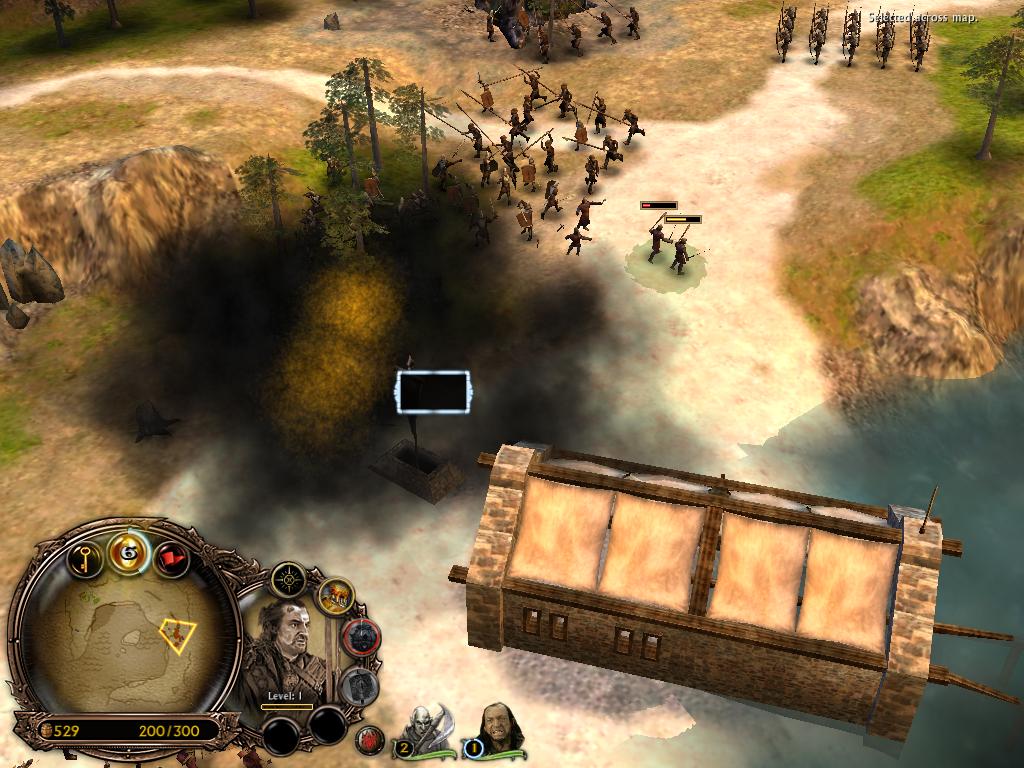 The Black Numenorian Marauders are not very strong or fast, but they can cause great destruction with their powers:
1 - Plunderers of Umbar (Steals resources whenever attacking structures)
2 - Spill Oil (Spills oil on the ground and then lights it to set the ground in flames)
3 - Spill Gunpowder (Spills gunpowder on the ground to cause a deadly explosion when lit)

Spill Oil and Spill Gunpowder both require specialisation to work, which means that you first have to buy the upgrade for a power, then you can only use the power you just bought.

But the binding looks little out of place

Are they expensive units ?

They look funny but great

Nice to pwn some enemies with few umbar dudes

lol, I think I hit the wrong number key...

Lol, maybe I should check my binding more when I make models >_<

Portrait & button art - IthronAiwendil (not as good as Caluadan's art, but will do)

These two pics show you how a new Evil Men spell, Deception of Romestamo, works. First you target enemies, and then those enemies start fighting against each other

Desert Wind, a 5 power point spell which blast units into the air:

And finally, Goldberry, the wife of Tom Bombadil (I might have her as a summoned hero for the Elves):

Not keen on Goldberry, the colours are too intense.

Rest looks interesting, is there an FX for the desert winds power?

Not keen on Goldberry, the colours are too intense.

Rest looks interesting, is there an FX for the desert winds power?

There is some sort of dust FX, but I will make it better when I have time...

Ithron I didnt realise that Goldberry would look so, shiny in-game because in W3D viewer it looks ok so to fix that maybe you could make the skin little darker to make the colours look more normal

does it ever actually say in the books shes his wife?

nice update though, i like the desert winds power

When hobbits arrive to the House of Bombadil it says so.