What maps in BFMEII are they where the trolls beat the drums? High Pass and Rhun? What happens when the trolls hit those drums? I cant recall on the High Pass one, but in Rhun I heard (and cant verify) that if the troll gets to the drum on one of those large buildings it creates an earthquake or something?

There's a mission in Rhun

Maker of the Rise of Sauron mod

What maps in BFMEII are they where the trolls beat the drums? High Pass and Rhun? What happens when the trolls hit those drums? I cant recall on the High Pass one, but in Rhun I heard (and cant verify) that if the troll gets to the drum on one of those large buildings it creates an earthquake or something?

That was the Ettenmoors mission

Would be rather cool if it could be done

I can tell you right now though, that we'd need Sûl for something like that

Rohan Royal Guard, is something I've wanted to add for a looong time now. At one time I thought I would get Master Windus incredible models, but he's long gone from SEE Team now, and I don't want to bother him anymore =p So I did what RJ did, and used the awesome models from Elven Alliance instead (since Celeglin didn't list these as "no can takes" in his ReadMe, so please don't start any flaming now)

So, with full credit to Celeglin, I took the liberty of only slightly changing the helmets using close up photos of movie props =) 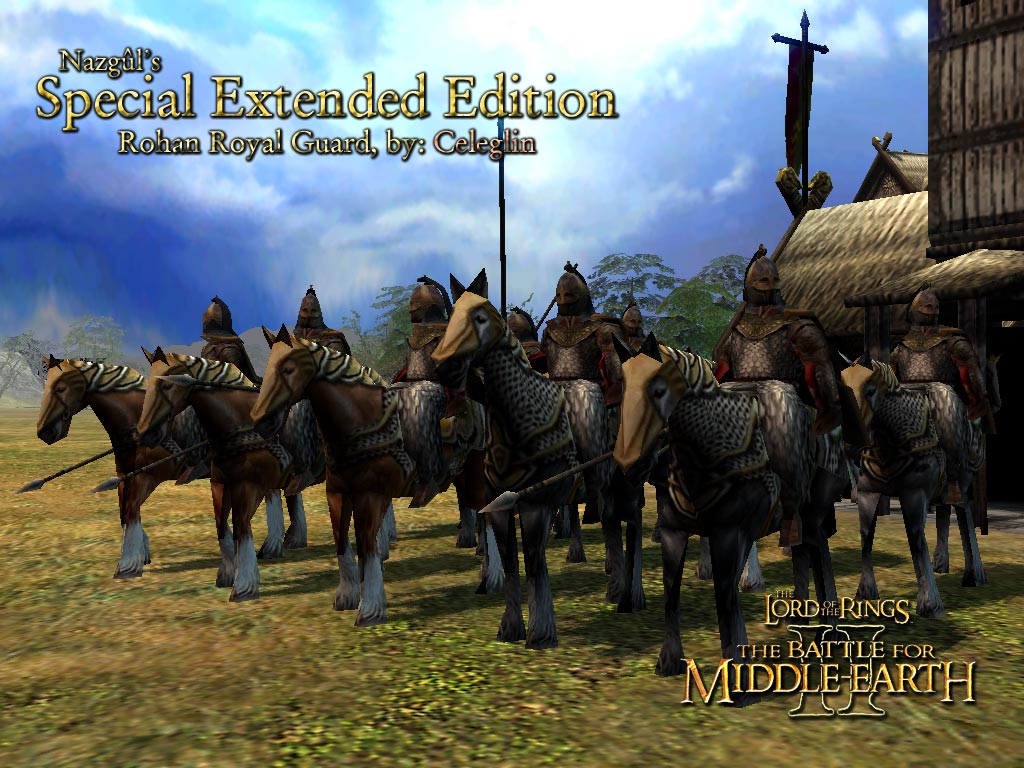 Rohan Royal Guard is now available at Rohan Stables lvl 3, and requires Armory and Infantry Upgrades (Forged Blades & Heavy Armor)... Thus they are the second Elite (anti-hero) unit of MotW, and limited to 2 battalions. Fountain Guard is nerfed to 1 battalion. We will also have 1 Royal Guard batallion on foot (from Golden Hall), making a total of 2 elite hordes on foot and 2 mounted for MotW. Yes, they will be a strong faction, like Mordor...

The horses are still EA standard... but I already started to fiddle with them a bit. Like removing the stupid golden armor and recolor it to metal. Might enhance the detail too... and make it more natural looking. I hate that white rim on the horses neck armor for instance. But that's for later when I get to Polishing. Now I'm gonna add the Royal Guard on foot =)

My plan is to add all the remaining units asap, so I can start working on balance and bug fixes after that

EDIT: Here we go... Royal Guard, elite anti hero battalion, recruited from Golden Hall. Prereq: Armory and Infantry Upgrades (HA and FB). Can swap between Bow and Sword. If I had my way completely, I'd like them to be able to upgrade to Shields too. Maybe a Modeler can edit that later on... 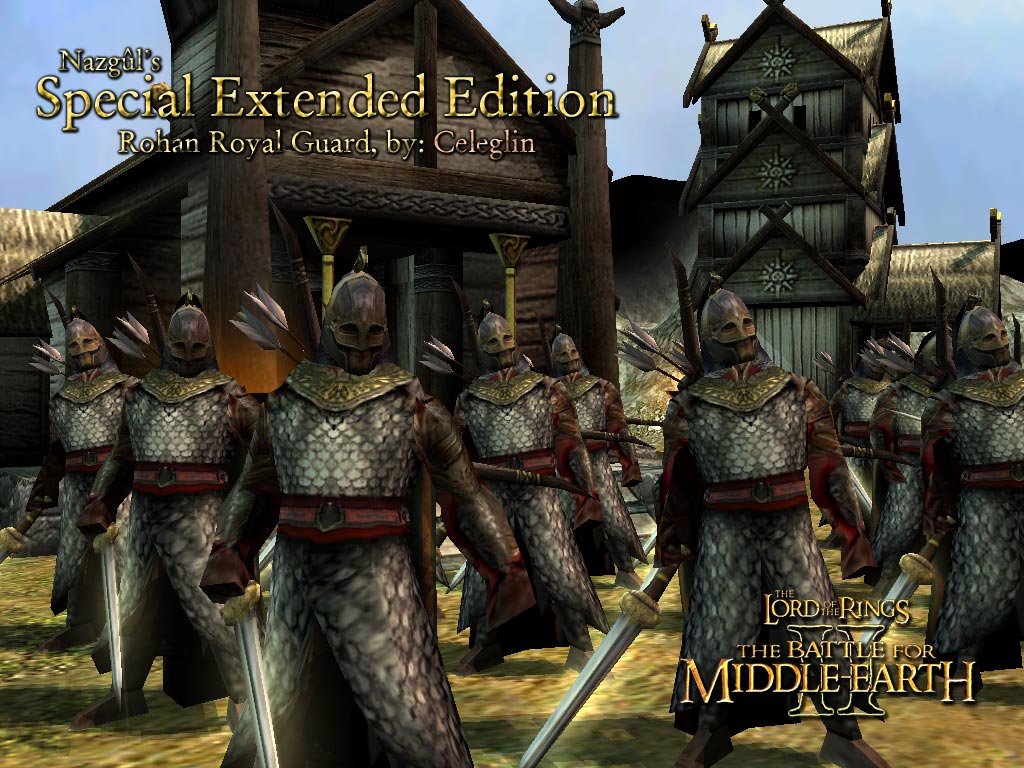 Mollock's new Leadership to Mordor Trolls; "Captain of Morannon", is now working perfectly (even if the setup was odd and weird), complete with "new" FX. I used the Treebeard ent FX, but with red color instead of green. Looks pretty good in game =)

Naturally he's also got the Dominate Troll ability. Might remove that from the regular Attack Trolls instead as they are quite powerful as they are =p 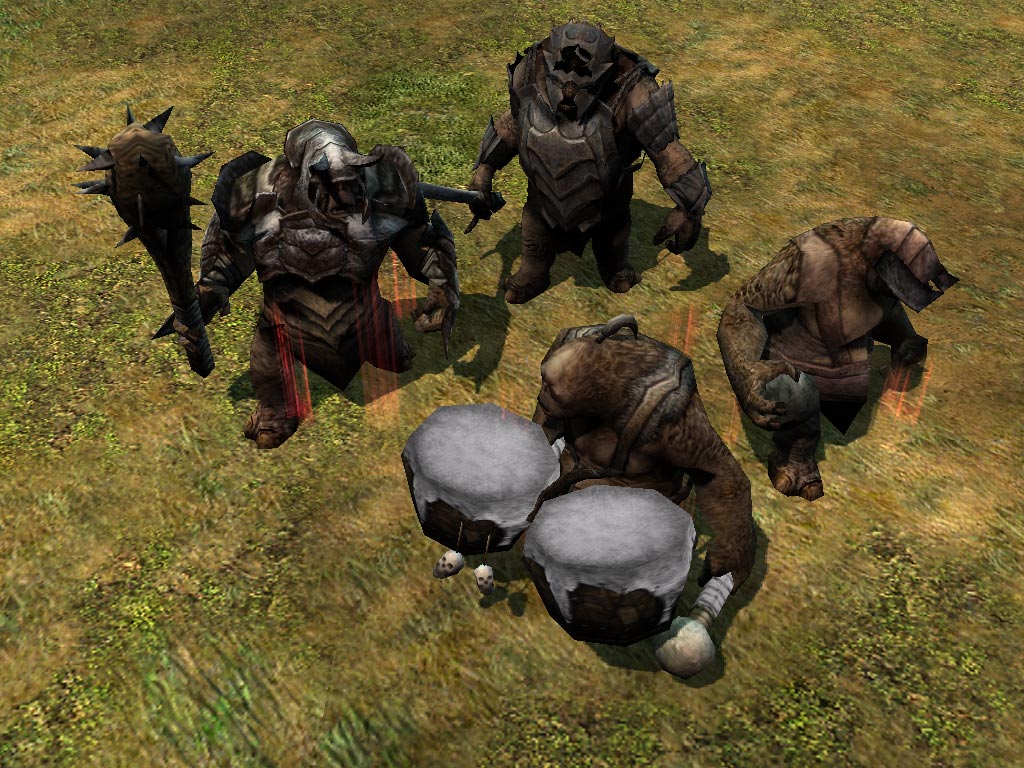 why does mollock have a black spot on his helmet.and the royal guards.... (drools)

What is the motherland,when you know you weren't born of land?

Looks great but mollock could be a bit bigger....the attack troll looks more dangerous than mollock.

- The black spot on Mollock's helmet is an EA bug in the CaH model. Build one like that in game and you'll see. Not sure if any modeler can fix that. I tried to hide that part in codes but couldn't find it...

- Mollock's size is a camera result of him being further away in that shot. He's slightly bigger than an Attack Troll, and if I place him in front of all them Trolls, he looks way bigger

We'll have to live with that helmet bug though unless someone offers to fix it somehow. I'll ask Digi_byte at some point.. =p

And the Mollock troll is something I've always thought Mordor should have since I saw him in the last movie at Morannan, owning Aragorn, hehe =)
Glad you like the changes

I don't think that the helmet is like that in RotWK. I wonder what they did to fix it.

I remember Mollock's foot was about the size of Aragorn's chest.

F.I.N.A.L.L.Y. I got them darn Dwarven Miners in game! After what feels like 2 weeks of struggling with this unit... finally!

I could never get the LUA to respond though, so they'll have to manage with pick axes only, and no shovels to randomize with 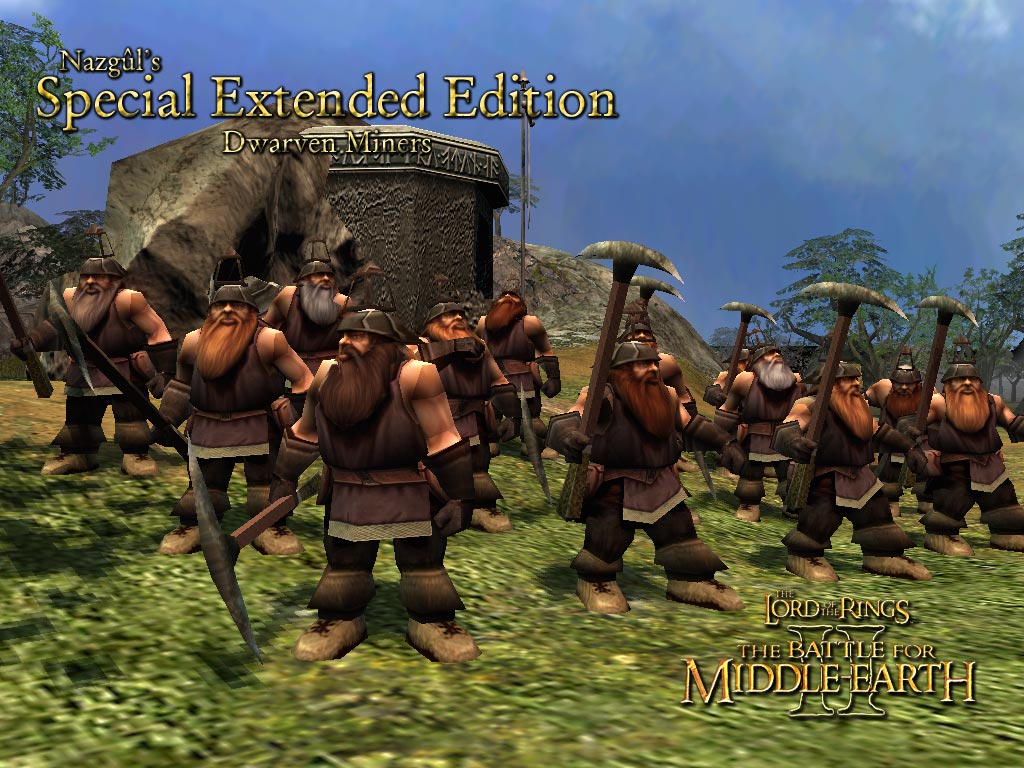 During polishing phase later, I'll ask a Modeler to rebind the obsolete unit to this skeleton, as this model lacks the lantern light, and also carries some small model "errors" on the left arm. But we can fix that later =)

they are Miners,of course they use pickaxes and not shovels.

What is the motherland,when you know you weren't born of land?

Back to SEE News