Hello. Glad you enjoy the mod.

There is an error in 009 Beta 2 which causes a game crash. It's the Laser general Squid Drone. It is built by the Laser AI, so chance of crashing is high.

There is a fix for it:

Download this: https://cdn.discorda...rceLaserFix.big
Then put "!!" in front of the filename, like this: "!!Contra009b2-AirforceLaserFix.big" and place it in your ZH folder.
009 Final will have many errors fixed - from small visual errors, through AI and performance issues, to crash+mismatch fixes.

Happy Easter everyone!
This time we didn't make a news article, since there are not many visually finished changes, but we do have one new unit ready. "Atlas" base defense replaces the old SSM artillery defense for Super Weapon general at rank 3.
Cost and build time are the same, it can hold up 4 infantry like before. But it lost ability to clear toxins and acids.
Also, it doesn't fire rockets anymore, instead it fires Power Bullets which can be upgraded both with Emmiter upgrade and EMP explosions.
Bullets are currently not deviated by ECM field.
Stay tuned for the upcoming Update with more news and fancy stuff! 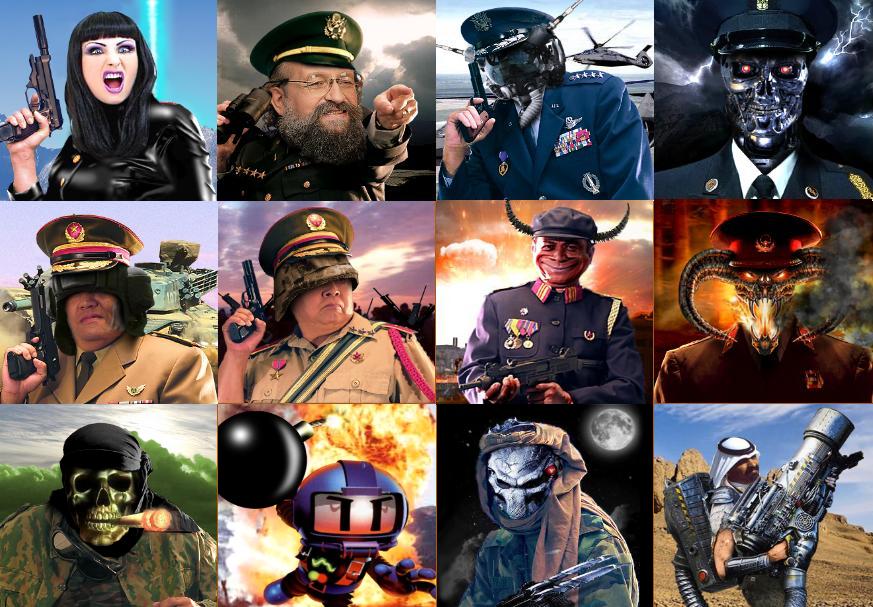 Hi everyone, as promised, we are releasing yet another version of Contra mod.
A year has passed by since the last beta version, and we made a lot of changes. As usual we have made many new things for you guys to discover and enjoy. Improved old and bad things, fixed bugs, and added new stuff for you to play with. Two brand new Challenge maps are available: Demolition and Flame.

Before actual download link, there are few new visual improvements to show, so let's start. Old Avenger model got replaced with new one, but it is not just visual update. New Avenger has only one weapon, which is of course anti air, but he got new hybrid armor. Armor which is resistant to RPG missiles more than usual AA unit, and also resistant to Jet Missiles. You could say, it is combination of regular tank, and anti-air tank. In order to balance generals' powers, we did some changes there too. So Air Force general's Shockwave Bomb is removed, and replaced with SEAL drop. SEALs are dropped by 3 stealth Black Hawks, which are very well armored too. This power is available at rank 5. So as explained above, SEALs are dropped by stealth Black Hawks. All together 9 Seals, very well armored and equipped with M32 grenade launcher effective vs all ground targets. They come as a good support, or ambush attack from behind. In future, SEALs will get the ability to swim, and place explosive charges on structures. They are also stealth while not moving or shooting. GLA Toxin general's demo traps are replaced with toxin pumps now. This nice little thing can spill both toxin and acid (despite of the name) around itself and damage nearby units. It is manually controlled. Acid damages pump and destroys it, but if you purchase Neutralizers upgrade at rank 3, pump won't damage itself anymore. Of course, both toxin and acid can be even more upgraded to bring more damage. Plant those things on map, pollute everything and enjoy watching your enemy dying slowly. Toxin pump is stealth, and can be destroyed by any unit.

Last but definitely not least, is improvement on GLA structures. PredatorBG took some time to improve GLA textures, and with this, all structures look much better.

This is render of GLA assault general's Temple And here is a picture of all GLA structures together: Before you download and start playing, please read these most important gameplay changes, and avoid unpleasant surprises

Now, we will take some rest from working on new version, and we will be available for online playing with you. So, we are inviting you to join us in Tunngle and play with us, if you see us there, feel free to challenge anyone for a game.

We would also like to thank some youtubers, which helped us in promoting Contra, with posting their videos. Either on multiplayer or challenge games. Visit their channels, and watch some good videos:

And a few more final words, about our future plans. So next release will be Contra 009 FINAL. Which will have some finished things from this version, and fixed bugs. This 009 Beta 2 is almost as complete as 009 FINAL would be, but we decided to release it under beta code name, in order to give you guys something for holidays. We plan to release 009 FINAL in 2017, if our RL goes as planned.

We would like to thank you for all support, and for voting on MOTY. Keep in mind, we are just 2 people that are working on all aspects of this mod. We have RL same as you guys have.

See ya next time!

Why "lei sheng" and "ECM tank" don't have the "jammer" ability that "jammer trooper" already has ??

The pace of leach's money stealing should be slowed down !!!

The lancer is over powered, you must choose one of these:slowing down the ROF "or" decreasing firepower

I'll bring these to discussion.

the game crash to desktop

You did not understand me. The "Maps" folder which you need is inside the .rar archive. Extract everything to your ZH directory and you're done.

Playing .008 and .009 and every time I face General Granger on easy in challenge the game will crash claiming a "Serious Error", I have tried with other generals but with no difficulty; it is only him. A bit of research points that a problem with compatibility mode, but it seems to already have been solved.

It is a well-known crash with this map.

Originally posted on ModDB by dcesarec on Feb 14th, 2016
Hi people,
I hope you are all enjoying 009 Beta release. We want to thank you for voting for us, and for your support.
It's also great to see 100 downloads of 009 Beta per day.
As usual, we are working constantly on balance, bug fixing, and adding new stuff. I am here to present you 3 new finished models.
- So, let's start. In order to bring as much as diversity as possible to generals, SW general got a new structure. Well, it's not so new, but its stats are different than other USA generals, and thus model is also changed.
It is Ion Plant structure. Ion Plant is cheaper than any other power plant in game, it is built much faster (those stats are still subject to change, so I won't write them in numbers). It gives SW general opportunity for rush, expand faster and take more control of the map. But, in order to balance it, you cannot upgrade System defense on it anymore, because player would attack with these structures. Also, it brings less power to you. So, you will need to make very large number of them to support your base. It has less health, and when destroyed, causes a small EMP explosion, shutting down all nearby tanks and structures for a few seconds. You cannot purchase more energy production on it like you could on other USA power plants. It has a nice rotating animation and awesome lighting effect. This is the new thing for SW general.
- Another update is for Cybernetic general. His old stealth patriot defense is replaced with new defenses. First one is Missile Defense System. Missile Defense System is effective only vs. ground targets, and more specifically vs. tanks and vehicles. Deals small damage to infantry too. Fires 6 rockets instead of 4 like old Patriot and does not relay position of enemies to nearby Patriots anymore. But its firepower is slightly better than Patriot. It provides better defense vs. tanks and especially vs. ECM because it has a stronger secondary damage radius.
- And last structure, also for Cybernetic general, is Gatling Defense System It is perfect anti infantry and anti air defense. Not much to say about it, you get the picture.
All those Cybernetic defenses are currently built as a separate object, but with help from TheHunter in coding, they could actually be built as upgrade on one specific structure (node).
Challenge and Campaign are being worked on. More info on those is coming in the next updates.
That's it for now, stay tuned.
P.S.
Once again, I will share you two YouTube channels which have and will have a lot of Contra videos, so track them and enjoy some nice battle videos:
Irwe3
westwood03051989

Originally posted on ModDB by dcesarec on Dec 7th, 2015

Dear Contra players,
with small delay, we are bringing you first 009 release. As already known, our team which consists from 3 people (d-ce, ThePredatorBG, and our tester Persun) was working on 009 beta for about a year.

But real life took from us even more time which we would dedicate to this project. So many plans and ideas are still not implemented in 009 release. However, many new things are inserted, many things are improved and fixed. You can read a detailed changelog here: http://www.moddb.com...logs-part-16-17

We encourage you to download this version, which is better than 008 Final in many aspects. Play it with friends, and play it with us.

Also, please support us by voting for us. No matter of winning something or not, it means a lot for us by knowing that people are still liking this project.

Installation video tutorial (more info can be found in video description on YouTube):

Welcome back to Contra. It's been a long time. Some people thought we are dead, others thought we are having a super nice vacation. Unfortunately, we were not on a vacation, but fortunately we are alive. That's enough about us. You came here to hear about Contra, right? Second, we have fixed Observer interface. Coordinates now properly match the new interface, which was introduced in 008 beta. Generals' icons are now displayed instead of vanilla faction icons. The general's portrait can be seen when a player is selected. Third, we have a new launcher for Contra. Contra now works in conjunction with other mods. But that's not all. You can switch between new and vanilla soundtracks, new and vanilla unit voices. Language and start options are easily selectable too. Made by Predator_BG. And finally, a new trailer for the upcoming 008 final (big thanks to SmokeMelvin)!

We have recently started testing Contra online to find any bugs and imbalanced stuff. Challenge maps are also being tested. We hope you enjoyed this update. We are not dead.

I'm From Thailand, Contra mod  It's Awesome.  I Like It

Tell Me Please   . . .  This will be completed this month

Sorry I am weak in English

The old Generals' pictures will be returned and the Beta will be released this month.

I really enjoy the contra mods. Unfortunately, I do not believe 008 will ever come out. Been a lot of talk, but no change ( other than skins/models) in almost a complete year now. I can't wait till Generals 2 Makes it out.

Keep waiting and you will see why you're wrong. We are adding some cool stuff, but it has not been shown yet. We are not working on updating the models only. Just because you see the new models in the updates doesn't mean that it's the only change. Have you seen a briefing example?